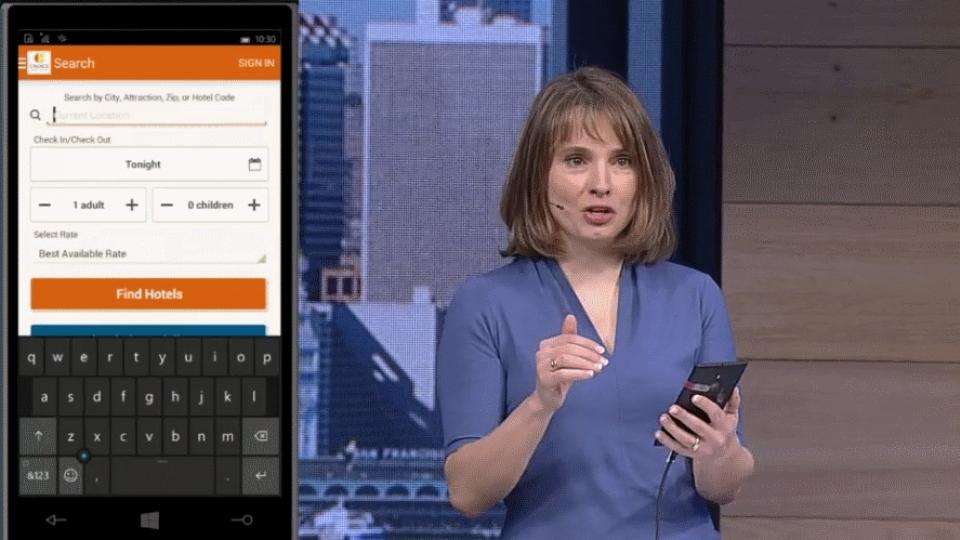 Your favourite Android and iOS apps could soon be appearing on Windows 10 phones and tablets, if Microsoft gets its way. The company is openly wooing developers by making it much easier to transfer apps from both platforms to Windows 10.

As we reported yesterday , Microsoft has released a new set of tools that it claims will allow developers to easily port Android apps to Windows devices. During a keynote speech at its Build developers conference in San Francisco, Microsoft demonstrated how a hotel booking app running on an Android phone could be made to both look and operate in an identical fashion on a Windows handset.

More surprisingly, Microsoft is doing the same for iOS, creating a compiler that allows developers to re-use the same Objective-C code they use for iPhone and iPad apps on Windows phones and tablets. Those iOS apps will even have the option of using more features than they have access to on Apple's devices, such as integration with the Cortana voice assistant, live tiles on the homescreen, and more. "We want to enable developers to leverage their current code and current skills to start building those Windows applications in the Store, and to be able to extend those applications," Windows chief Terry Myerson, told The Verge .

Microsoft's move to embrace Android and iOS developers is an open admission of failure. The company has struggled to attract developers to Windows phones and tablets because its market share is so small that developers don't consider it worth the effort. Microsoft has previously been forced to throw money at developers to convince them to bring their apps to its stores, but that is clearly unsustainable.

Instead, Microsoft hopes that by helping developers to re-use as much existing code as possible, they will be more inclined to add Windows to their list of supported platforms. The success of the strategy will hinge on whether apps are as easy to port, and run as smoothly on Windows, as Microsoft claims.

The new options to port apps also means it's highly unlikely that Windows phones and tablets are going to benefit from many exclusive apps in the future. Windows 10 on mobiles will become a me-too operating system, at best receiving the same apps that have been previously or simultaneously released on Android or iOS.

Now all Microsoft needs to do is give people a compelling reason to buy Windows phones and tablets...