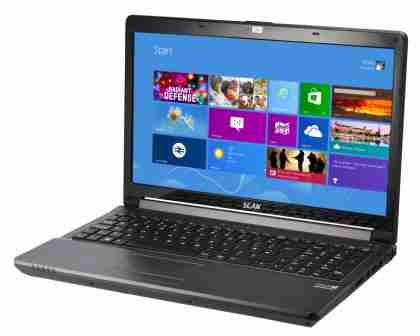 Scan’s new 3XS Graphite LG155 laptop uses the quad-core 2.4GHz Intel Core i7-4700MQ processor, which is the same Haswell processor that powers the award-winning MSI GE60 . Its Turbo Boost feature lets it increase its clock speed to 3.4GHz when there’s enough thermal headroom, further increasing its performance. This processor, along with its 8GB of RAM, makes it a powerful laptop. Plus, the 3XS Graphite LG155 is currently much cheaper than the MSI GE60.

The 3XS Graphite LG155 produced a mightily impressive overall score of 91 in our multimedia benchmarks, placing it just five points behind the GE60. It’s also just nine points below our reference desktop processor, the Core i5-3570K, so you can be sure the LG155 will provide PC levels of performance without any significant slowdown.

Its graphics processor is the 2GB Nvidia GeForce GTX 765M, which tore through our Dirt Showdown graphics test, producing a super-smooth average frame rate of 83.2fps a 1,280x720 resolution and High quality. The LG155 also produced excellent results when we increased the resolution to its native 1,920x1,080, managing an average 59fps at High quality with x4 anti-aliasing. You should have no problem playing many of the latest games with high graphics quality settings.

The LG155 also produced one of the best frame rates we’ve seen on a laptop in our Crysis 2 test. With graphics quality set to Ultra, we saw a consistent 24fps at a 1,920x1,080 resolution, which is a slightly higher frame rate than that produced by the MSI GE60. This frame rate isn’t high enough for smooth play, but we saw a much smoother 53.6fps when we lowered the settings to High.

With such similar specifications, the LG155 is certainly much better value on paper, but its plain, grey plastic chassis doesn’t look half as attractive as that of the MSI GE60. This is to be expected given that Scan doesn’t have the resources to build its own custom laptop cases, but it’s still a marked improvement on other off-the-shelf Clevo cases we’ve seen from this OEM. It’s not too heavy for a gaming laptop either, with a weight of 2.7kg.

This new chassis also comes with a pleasantly springy keyboard. Keys were well-spaced and gave plenty of tactile feedback, and the keyboard conveniently has a separate numberpad. However, the hard edge of the keyboard tray did have a tendency to dig into our wrists, which made typing on the LG155 a little uncomfortable after a long period of time. 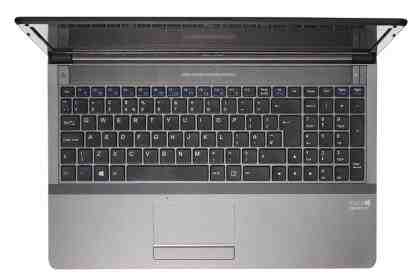 The touchpad was a little sensitive at times, as we often caught the top corners of it with the edge of our palm, but its smooth surface was very responsive. We had no problems using it to navigate the desktop, and its long button bar at the bottom was accurate and gave firm feedback when we were clicking through our files. We were disappointed it didn’t support multitouch gestures such as two-finger scrolling, though, and we couldn’t swipe from the edges to perform Windows 8 shortcuts either.

The 3XS Graphite LG155 has a fantastic complement of connection ports. It has two USB3 ports and one USB2 port (one of which doubles as an eSATA port), VGA and HDMI outputs for connecting the laptop up to an external display, an SD card reader, a Gigabit Ethernet port and a DVD re-writer. 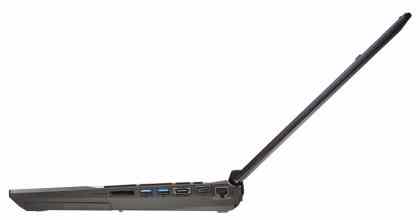 It also has separate headphone and microphone jacks, as well as 3.5mm S/PDIF digital audio output. You’ll want to take advantage of these, as its integrated speakers were very tinny with barely any bass. Our review sample also came with a 1TB hybrid drive that combines the large capacity of a mechanical drive with the speed increase of an SSD. It isn’t as fast as a true SSD, though, so you may want to specify an SSD when you buy the LG155 should you prefer one.