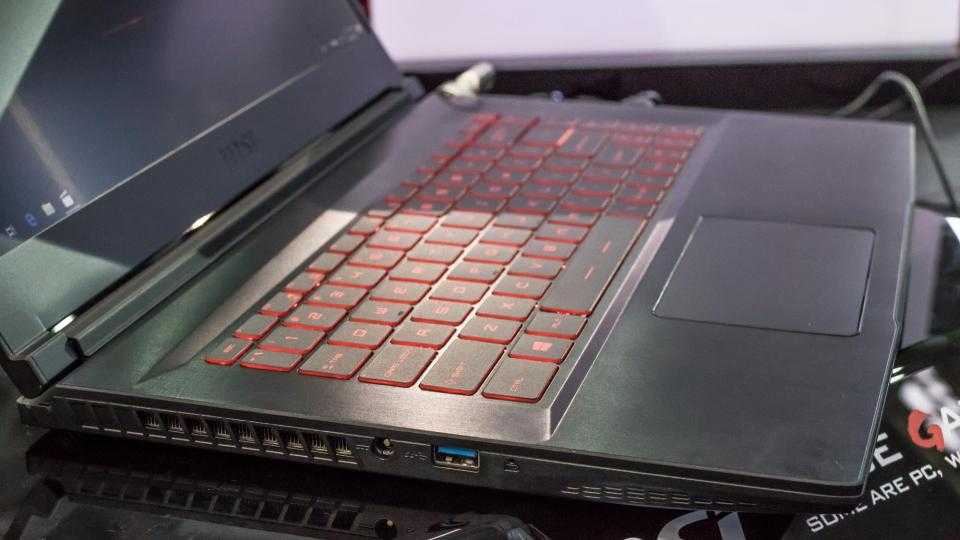 If you’ve been lusting after a slimline gaming laptop at a slightly more sensible price, then MSI may just have something for you. The company’s GF63 laptop partners a 15.6in display with super slim bezels, Intel’s 8th Gen processors, and Nvidia’s GeForce 1050 and 1050 Ti GPUs – and with starting prices of around $999, it looks like it might just sneak under the £1,000 mark in the UK.

MSI are listing two models at the moment, but we’re not sure whether they’re both coming to the UK. With a suggested starting price of $999, it looks like the GF63 8RC is going to be the cheaper of the two with its GeForce GTX 1050, while the GF63 8RD ups the ante with a GTX 1050 Ti.

Moody, understated, red. These are all words which suitably describe MSI’s GF63. It might not have the technicolour RGB lighting of rivals such as Asus’ ROG Strix Hero II or Gigabyte’s new Sabre 15 and 17, but the MSI’s all-red backlit keyboard looks wonderfully ominous.

It’s difficult to argue with the design either. The brushed metal lid and keyboard surround looks great, and the angular, unfussy figure looks purposeful without being overly brutish. If it wasn’t for the red backlighting – which of course you can always turn off – you probably wouldn’t register this was a gaming laptop at all.

Despite an all-in weight of just 1.86kg, and a chassis that measures a relatively dainty 21.6mm thick, the overall build quality feels pretty solid. The SteelSeries keyboard has a crisp, reassuring action, and the metal lid means that there’s not too much flex in the display either.

Connectivity is spot on. There are three USB-A ports and a single USB-C port running at USB 3.1 Gen 1 speeds, a DC input for the mains charger, and the HDMI output is sensibly located at the rear of the laptop. The only annoyance is that the HDMI is limited to 30Hz at 4K resolutions.

The Full HD IPS display up top looked pretty good on the show floor, with vivid colours and enough brightness to punch through the intense lighting of MSI’s stand. We’d be inclined to wait until we have our colorimeter to hand before making any final judgment, but two things are for certain: the tiny 5.9mm bezels on either side look top-notch, and we’re super pleased that MSI has opted for a matte anti-glare finish.

With both MSI and Gigabyte launching affordable gaming laptops into the fray at this year’s Computex – not to mention Asus’ pricier ROG Strix Scar II – there’ll be some tight competition in the 15.6in laptop category towards the end of 2018. We’ll look forward to an epic battle between the trio in the coming months.