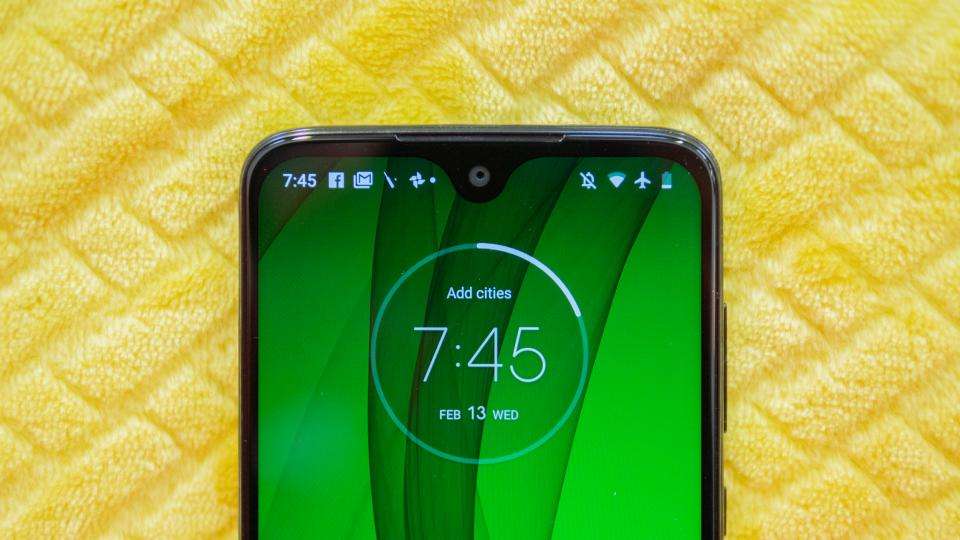 Aside from the occasional blip, Motorola has been able to claim the title of budget smartphone king since back in 2013, but the competition is fiercer than ever for 2019’s offering. Not only does the Moto G7 face rivalry from the rest of an expanded Moto G range – the Moto G7 Play, Plus and the big-batteried Moto G7 Power – but there are strong challengers from Chinese manufacturer Honor now, too.

Motorola’s answer to this in previous years has been to incrementally bump up the price and the quality of its phones, a strategy that has so far seen a fair degree of success, and the approach is much the same this year. So, we now have a phone that ups its game when it comes to design and specifications, as well as a bump up in price.

READ NEXT: The best smartphones to buy today

Motorola Moto G7 review: What you need to know

What’s new with the Moto G7 in 2019, then? Well, a number of things, starting with a larger, 6.2in display (last year’s Moto G6 was 5.7in) that’s also now an edge-to-edge screen. As with many other modern phones, the Moto G7 has a notch to house the selfie camera, which may or may not offend you.

The internals have seen an upgrade this year, with Motorola employing the new Qualcomm Snapdragon 632 processor and the fingerprint reader has moved from the front, below the screen, to the rear. Motorola might not be shy about squeezing flagship features into relatively cheap smartphones but in-screen fingerprint readers are, apparently, the limit right now.

So, what stays the same? Well, the phone runs the latest version of Android (9 Pie), which is as close to “stock” as you’re likely to get. It has the same camera hardware as last year, the battery is exactly the same size and the construction is the same, with Gorilla Glass 3 at the back and front sandwiching an aluminium frame. 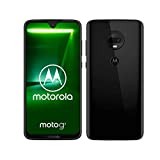 The other big change is the Motorola Moto G7 has had its price bumped up by £20 to £240 in 2019, which puts it in range of some heavy hitters. Our pick of the bunch at around this price is the Honor Play , primarily because it squeezes in a seriously fast Kirin 970 processor. You also have the option to save some money and go for the Honor 8X (£225) which isn’t as powerful as the Honor Play but still has more potency than the Moto G7.

Perhaps the biggest challenge to the G7’s supremacy comes from the impressive-looking Motorola Moto G7 Power. Launched at the same time as the Moto G7, this has similar internals and a slightly inferior camera setup, but a much bigger battery delivers near record-breaking stamina. It costs £60 less than the Moto G7, too, at £179. 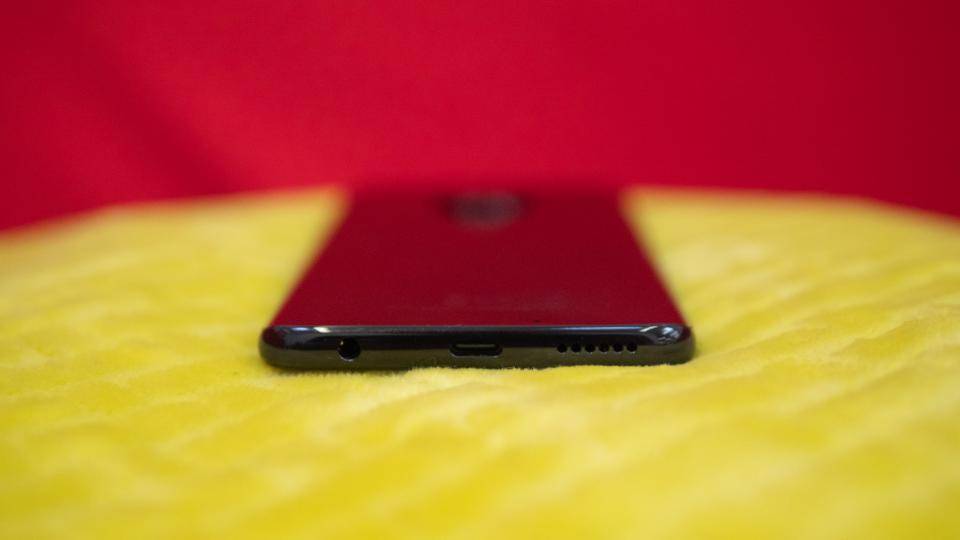 The single biggest new feature from a design perspective on this year’s Moto G7 is its edge-to-edge display. This fills most of the front of the phone and ensures that, despite being 0.5in larger than last year, the handset itself isn’t much bulkier; it’s perhaps half a centimetre taller and a few millimetres wider but that’s about the limit of it.

That front-filling screen has a couple of knock-on effects, though, and the first is that there’s a notch here, which is a rather unsightly example of the breed. It’s a proper pimple-shaped intrusion at the top of what is, otherwise, a rather handsome display. The narrower bezel beneath the display also means the fingerprint reader has had to move to the rear of the phone. That’s not a problem for me and even if you favour front-mounted readers you’ll quickly get used to it.

As I’ve highlighted above, the rest of the construction and, indeed, the layout is similar to last year’s Moto G6. Gorilla Glass 3 tops and tails the phone, the volume and power buttons are on the right edge and there’s a 3.5mm headphone jack and USB Type-C charger port on the bottom. The top edge plays host to the nano-SIM card slot, which is also where you pop in your Micro SD card if you want to expand the phone’s 64GB of internal storage.

Flip the phone over and you’ll see yet more similarities between the Moto G7 and Moto G6 with the long edges curving gently over to meet the colour-matched frame (the phone is available in all-black, or silver colourways) and the dual camera is housed in a circular “bump” in the centre towards the top, just above the fingerprint reader. To my mind, the detailing isn’t as attractive on this year’s phone, however, with the faceted surround on the camera bump replaced with a featureless, glass-topped cavity.

The most obvious new feature on the Moto G7 is its display, which measures 6.2in across the diagonal and fills most of the front of the phone. It’s an IPS-based display, so contrast isn’t flat-out perfect like it is on phones that use AMOLED technology but, otherwise, we’re looking at a reasonably good screen.

It’s bright, reaching a peak luminance of 481cd/m2 with the brightness slider adjusted all the way to the right (and auto brightness disabled). Contrast is decent but hardly stellar at a measured 823:1 and colour representation is, likewise, fine but not exactly amazing.

In the settings, you have three colour profiles to choose from: Natural, Boosted and Saturated, of which Boosted gives you the best compromise between colour saturation, accuracy and contrast.

All-in-all, the Moto G7’s display is decent, although other phones in this price bracket have brighter, more punchy displays. The Honor Play is a good example, reaching a peak brightness of 465cd/m2 and a contrast ratio of 1,589:1, while delivering sRGB coverage of 91.6%.

While the display is, perhaps, the most noticeable upgrade, hidden within the tight confines of the Moto G7’s glass and aluminium case is the processor, which this year sees an upgrade to the new 1.8GHz octa-core Qualcomm Snapdragon 632 chipset.

Backed up by 4GB of RAM, this delivers significantly better performance than last year’s Moto G6, as you can see from the charts below. The issue for the Moto G7 is, however, that since this time last year we’ve seen several faster performers emerge at around the same price.

The Moto G7’s slower frame rate in the GFXBench tests compared with the Moto G7 Power and Play are due to the fact that it has a higher resolution 1080p display.

We also took the time to test the Moto G7 with PUBG Mobile and Shadowgun Legends using Gamebench’s performance analysis software . In PUBG on the “High” frame rate (capped at 30fps) and “Smooth” graphics quality, I saw solid median frame rates of 30fps and a frame rate stability of 100%, meaning that the frame rate was pretty much locked in.

Playing Shadowgun Legends with the quality set to low and the framerate limit set to 60fps, the Moto G7’s frame rate fluctuated considerably more with the median frame rate dropping to 28fps and frame rate stability to 67%.

The take-home here is that, while the Moto G7 will play demanding games reasonably well it will only do so at reduced quality levels.

It’s a similar story with battery life and this is another area where the cheaper Moto G7 phones outdo the regular Moto G7. Perhaps because its 1080p screen is more power hungry, the Moto G7 lasted a mere 11hrs 26mins in our video rundown test – a surprisingly poor result next to the Moto G7 Power’s incredible 26hrs 22mins.

Admittedly, this is better than the Moto G6 by nearly 40 minutes but the Moto G7 is also beaten by the Honor 8X, the Honor Play and Honor 10 Lite by an hour or more, which is disappointing.

All of which brings me to the camera, which in the Moto G6 was the phone’s crowning glory and prior to the launch of the G7, was the best camera you could get on any smartphone below £300.

This year, little of significance has changed. In fact, the specifications on the rear camera are identical to the G6: it has a 12-megapixel (f/1.8) and 5-megapixel (f/2.2) dual camera array on the rear with an 8-megapixel selfie camera on the front. The notched design means the front LED flash is missing here, but otherwise, the whole setup looks exactly the same.

In good light without HDR enabled the Moto G7’s photos look all-but identical, too, to those produced by the Moto G6. There’s perhaps a touch more detail at the edges of the frame but the colour balance, image processing and details across the rest of the frame all look the same.

It’s a similar story in our indoor, low-light test scene. Both colour reproduction and detail capture are pretty much identical on the G7 and the G6, with the G7 slightly edging it when it comes to detail. So this section of the review is pretty easy. The Moto G6 and, therefore, the Moto G7 have the best cameras for still photographs of any smartphone below £300.

And, yet, there are some significant differences when you look beyond pure image quality. The biggest is video, where the new Snapdragon processor lets the Moto G7 record 4K footage at up to 30fps. Last year’s Moto G6 could only manage a maximum 1080p.

The camera software itself offers up some new features, too. In manual mode you can shoot in RAW, there’s a new levelling tool to help you keep your horizons straight, live filters have also been added, and the camera shutter will now capture images when a smile is detected. The latter doesn’t appear to have been designed with bearded men in mind, however; it failed nine times out of ten with my hirsute test subjects.

Despite the failure of capturing happy bearded gentlemen, though, the Moto G7 does have a seriously impressive camera for a smartphone at this price bracket. It’s better than all of its rivals apart from the Moto G7 Plus and it’s also marginally superior to the Moto G6 for detail across the frame, all while delivering more balanced colours in HDR and 4K video capture.

The Moto G7 also represents a decent improvement in design and performance over last year’s budget king. And, yet, I’m having much more difficulty deciding whether to heap the same amount of praise upon this year’s Moto G7 as I did last year with the Moto G6. That’s largely because its rivals have become so much stronger and the price has risen by £20.

In the end, I don’t think the Moto G7 is going to be this year’s best budget smartphone and the reason lies elsewhere in the Moto G7 range. The Motorola Moto G7 Power has a huge 5,000mAh battery that lasts much longer than the G7’s, it has the same processor too and it’s only pegged back by a lower resolution display and slightly off-the-pace camera. The Motorola Moto G7 remains a superb low-cost smartphone but, in 2019, there’s a new kid on the block.