I was a big fan of last year’s 17in LG Gram, not just because of its enormous display but because it delivered that huge screen without the weight penalty normally associated with such machines. It’s the only 17in laptop I’ve ever used that I’d be happy lugging around with me on my travels.

This year, LG has not only refreshed the 17in model but it has also introduced a new model: the LG Gram 16. This does a similar job to the 17in machine but in an ever-so-slightly more compact package.

LG Gram 16 review: What you need to know

The idea behind this marginally more compact Gram, however, remains the same as ever: to maximise screen space without upping the weight.

This is a laptop that has the same screen size (a resolution of 2,560 x 1,600) as the Apple MacBook Pro 16in and, yet, thanks to its lightweight magnesium alloy chassis, weighs a mere 1.16kg. That’s more than three-quarters of a kilo lighter than the MacBook, and it’s also lighter than the 13.3in Samsung Galaxy Book Flex2 5G and the 13.3in M1 MacBook Air.

The Gram 16, naturally, comes with updated internals, which consists of either a quad-core 11th gen Intel Core i7-1165G7 CPU with integrated Iris Xe graphics or the Core i5-1135G7, 8GB or 16GB of RAM and either a 512GB or 1TB NVMe SSD for storage. For those with more intensive requirements, there’s even a free M.2 (2280) slot inside for upgrades, although you’ll need to check your warranty before delving inside. 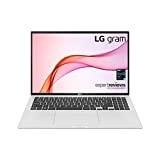 Those prices aren't bad but you can buy similar for less. Our favourite big-screen laptop at the moment is the 16in Honor MagicBook Pro , which is a bargain at £900 and comes with a Full HD resolution display, an AMD Ryzen 5 4600H CPU, 16GB of RAM and a 512GB SSD.

Both of these alternatives are superb laptops in their own right and are cheaper than the LG. However, neither can match the LG’s incredibly low weight, so if it’s a big-screen laptop on a diet that you want, you’ll have to cough up the extra cash.

UPDATE: Since publishing this review, the Samsung Galaxy Book Pro 15.6 has been released - a rival that's even lighter than the 16in LG Gram and, pound for pound, a superior machine in almost every regard.

This year’s Gram laptops may be just as slim and compact as last year’s Gram 17 but they’ve adopted a smarter matte finish this time around (in white or black). Build quality has been improved as well with a slightly more rigid, robust feel to the chassis. It still feels a little hollow and insubstantial compared with rivals like the Honor MagicBook Pro but it is MIL-STD-810G tested, so you can be reasonably sure it’ll survive a life on the road.

These aren’t the only changes; LG has given its lightweight laptop design a thorough going over in other areas, too.

The keyboard, for instance, has had a redesign. Each key is now larger and has sharper corners than before, although the gap between them is narrower. There’s none of that rather unfashionable brownish lettering to indicate the function key shortcuts, either. All the lettering is white and illuminated when you need it with an even, two-stage keyboard backlight.

Typing is a distinctly different experience, too. The keys have a more punchy click of feedback to them and significantly less bounce. In tandem with a roomier touchpad, that means the LG Gram 16 is a nicer machine to use overall. I’m still not sold on the utility of the number pad squeezed in on the right-hand side, though.

Other changes focus on ports and general connectivity. The LG Gram 16 no longer comes with a traditional DC power input port, instead employing USB-C charging at up to 100W. There are now two Thunderbolt 4/USB 4 ports on offer, and it’s good to see that LG hasn’t scaled back elsewhere. You still get a full-size HDMI port and 3.5mm headset jack, two USB-A 3.2 gen 1 ports and – photographers rejoice! –  a microSD card slot so you can offload your photos and videos without having to dig out a USB card reader.

This year’s Gram laptops continue to eschew face login – the webcam embedded in the screen bezel above the display is still a disappointingly bog-standard 720p affair – but you do still get a fingerprint sensor embedded in the power button in the top-right corner of the keyboard.

And despite promising to “immerse yourself in 3D Audio Rendering even without wearing headphones”, there’s nothing particularly special about the LG Gram’s new DTS:X Ultra branded speakers.

That’s not to say they’re not good. Improved amplification and drivers do deliver clear and detailed audio with a surprising amount of width but there’s not much richness or low-end on offer.

As with other Gram laptops, it’s the display that takes centre stage and the LG Gram 16’s is an extraordinarily good one. As with the 2020’s Gram laptops, you’re not getting touch support here, and I do miss being able to reach out and dab on-screen buttons and scroll.

However, what you miss in touch capability you gain in genuine practical usability. In particular, the screen’s 16:10 aspect ratio and 2,560 x 1,600 resolution makes it feel as if you can squeeze more onto the screen than on other laptops of this size. The screen feels vast in comparison to 16:9 13in and 14in laptops; even 16:9 15.6in laptops feel significantly smaller in use.

In addition, the screen performs exceptionally well from a colour output perspective. It produces a colour volume of around 101.3% of the P3 colour space and 98.7% of AdobeRGB. It’s reasonably accurate within P3, too, returning an average Delta E of 1.88. For professional photo editing in the AdobeRGB or sRGB colour spaces it will need calibration, though.

Either way, it’s a cracking display and looks superb when streaming video via Netflix or Prime Video.

Intel’s 11th gen chips have moved things on from the previous generation in terms of both efficiency and raw speed and the LG Gram 16’s quad-core Core i7-1165G7 and 16GB of RAM give it a clear performance advantage over the 2020 LG Gram 17.

In our demanding in-house 4K media benchmarks the laptop showed a whopping 39% improvement and although the differences were less pronounced in other, shorter tests, there was a noticeable uptick across the board.

It also suffers in comparison with 4000-series AMD-based laptops such as the Honor MagicBook Pro, although Intel’s integrated Iris Xe graphics do mean the LG is a more capable gaming machine, at least for lightweight titles.

What it can’t do is compete with the (currently) peerless M1-based MacBook Air and MacBook Pro, both of which stretch out a significant lead over the Intel-based opposition. Again, though, neither of those laptops have as big a display as the LG Gram 16.

As for battery life, that’s excellent as well, with the laptop lasting 11hrs 51mins in our video rundown tests with the display set to a brightness level of 170cd/m2 and flight mode enabled. It’s not quite up to the level of the Samsung Galaxy Flex2 5G or the M1 Apple MacBook Air but it’s better than any other 15.6in laptop I’ve tested.

All told, the LG Gram 16 is a terrifically good laptop and one that offers something other manufacturers don’t: extraordinarily light weight and a big, practical screen. On top of that it has surprisingly good battery life for a laptop with a screen this big.

If that’s what you’re looking for in a laptop, there aren’t many other rivals that can compete with it and there aren’t too many things to complain about, either. Aside from the lack of face unlocking, the LG Gram 16 is a fantastic laptop.