Sitting just underneath the P57W v5 in Gigabyte’s flagship gaming laptop range, the P55W v5 is essentially a slightly smaller version of its premium big brother, packing everything we loved about the giant P57W into a slightly smaller 15.6in chassis. In fact, apart from the difference in size, you’d be hard-pushed to tell them apart, as they both share more or less exactly the same specs and a near identical chassis design.

Sadly, that means that the P55W also comes with many of the same shortcomings, most notably its rather lacklustre build quality. The plastic chassis isn’t exactly what you’d call sturdy, and I noticed a fair amount of flex when typing on the keyboard.

The upside, though, is that it’s relatively light as far gaming laptops go, weighing in at just 2.6kg. Compare that to the mammoth Asus ROG G752 that weighs 4.4kg, and a bit of flex starts to look slightly more forgivable when it’s so much more portable and easier to lug around in a backpack. I was also pleased to see that the screen hinges are relatively sturdy, as they barely made the screen bounce at all during the course of my testing.

The keyboard might have a bit of flex, then, but it is at least relatively tactile and its well-spaced, backlit keys make the most of the available space. It’s a shame there’s not a larger gap between the main keyboard and number pad, though, as it did feel a little bit cramped at times when typing for long periods.

It’s also lacking any kind of gaming-specific macro keys, too, which are becoming increasingly common on high-end gaming laptops. While some gamers might not care about such things, they are useful for MMO-type games that require god-like reflexes and intricate key presses. There’s plenty of space above the keyboard for a couple of macro keys, so it seems a shame that Gigabyte decided not to include any.

The touchpad, meanwhile, is fairly modest in size, but there’s still plenty of room for large swipes and general navigation. Touch gestures were responsive and easy to execute as well. That said, it does tend to pick up greasy fingerprints quite easily, which rather hinders its overall look and appeal.

Put those keyboard issues to one side, though, and the P55W v5 surpasses the P57W in almost every way when it comes to pure performance, beating out the majority of gaming laptops we’ve tested in the past few months with its quad-core 2.6GHz Intel Core i7-6700HQ processor, 16GB of RAM and Nvidia GeForce GTX 970M graphics chip.

For instance, the P55W v5 laughed in the face of our Dirt Showdown test, producing an impressive 75fps on Ultra at a resolution of 1,920x1,080. With this kind of speed, you shouldn’t have any problem blasting through your old game collection at the prettiest settings they can run, and the P55W also coped surprisingly well with the graphically demanding Metro: Last Light Redux. On Ultra settings with SSAO turned off at 1,920x1,080, it managed a very respectable 55fps, which just edges in front of the P57W’s 51.8fps average. 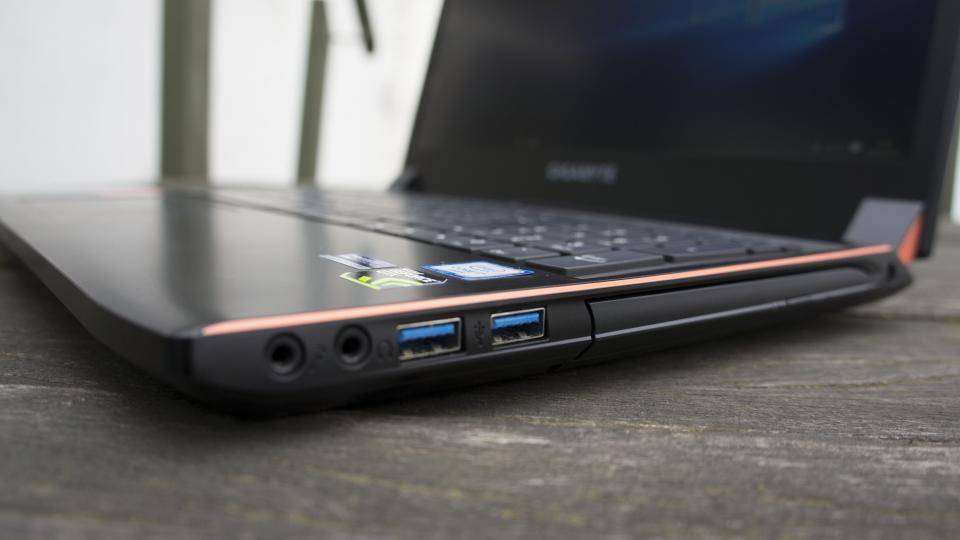 That said, the fast approaching two-year-old 970M graphics chip is starting to show its age now and isn’t necessarily future-proofed if you want to run the very latest releases at the highest fidelity levels in the near future. It’s not yet confirmed if or when we’ll be seeing mobile versions of Nvidia’s new GTX 1080 and GTX 1070 cards making their way into gaming laptops, for instance, but if running games at the highest settings is important to you, then you may want to hold off for a bit before laying down £1,000 for the P55W.

Thankfully, the P55W certainly isn’t short on processing power, as its Core i7-6700HQ processor was more than capable of handling our demanding 4K CPU benchmarks. With an overall score of 118, it surpassed our reference Core i5-4670K desktop processor by 18 points, so it’s more than capable of handling intense multimedia programs and running several applications simultaneously. It also beat the P57W by an even greater margin, as this only scored a rather disappointing 93 despite sharing exactly the same processor.