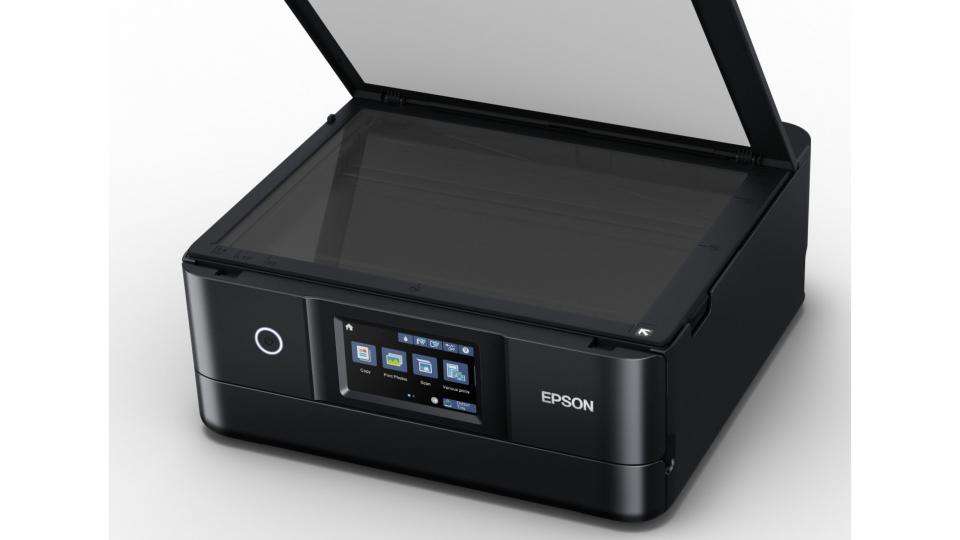 We’re long past the days when you could tell a home printer from an office printer from a specialist photo printer, and it’s really just the word Photo in the name of the Expression Photo XP-8600 that tells us this isn’t just another inkjet all-in-one. It’s what’s inside that counts, though, and with a 5,760 x 1,400dpi

Epson Micro Piezo print engine and six Claria Photo HD inks, Epson’s latest comes in packing the right stuff. It sits at the top of Epson’s A4 home photo printer range, with only the manufacturer’s SureColor professional printers above it, but where those are pricey, dedicated photo printers, the XP-8600 is pitched as an all-rounder that also prints great photos.

The one-box, tray-less design is very much the norm for the modern all-in-one, but the XP-8600 carries it off with a little more style. The panel at the front with the touchscreen tilts outwards, while the paper goes into an internal 100-sheet cassette, itself concealed beneath a hinged flap. The output tray pushed out on demand, kind of like a tongue sticking out from between the printer’s jaws. You can even extend and retract it at the touch of a button.

A secondary tray can be found on the top at the back, hidden behind a flap, it’ll take in a range of envelopes and photo media, including 6x4in and 8x10in photo paper, and we didn’t experience any problems with either feed during testing – or while printing out a bunch of photos after.

With the trays packed away this is a very compact printer, measuring just 35 x 34cm and 14cm tall, and there’s really not much in the way of clutter. Its controlled by a 4.3in colour touchscreen with no physical button bar the illuminated power button, while the physical connections are restricted to an SD card slot and USB Type A port at the front and a USB Type B port at the rear. The printer connects to the network via 802.11n Wi-Fi.

The six cartridges, themselves quite large, slot into place on the print head once you’ve raised the scanner module, and beyond that setup is quite straightforward. The wizard doesn’t cover wireless setup, but tapping on the icon on the homescreen starts the process and you can type any wi-fi passwords in using the touchscreen, which is almost as responsive as the similarly-sized effort on Canon’s excellent Pixma TS-8350. With simple, logical menus and a colourful design, the XP-8600 is, for all its features, a very easy all-in-one to use. At the time of testing, though, no drivers were available from Epson’s website. We had to install them from CD, and not everyone will have that option.

We’re now more likely to print photos from our smartphone or the cloud than stick an SD card in a printer, and the XP-8600 supports Epson’s iPrint app to enable you to do just that. There are options to print from Google Drive, Dropbox, OneDrive, Box and EverNote, though curiously not dedicated photo sharing services like Google Photos, Instagram or Flickr. That’s not a problem if you have the apps on your phone, however, and otherwise smartphone printing works a treat, albeit without all the options you’d get on PC with the full printer driver.

Like we said, the XP-8600 is pitched as a premium all-rounder, but in terms of speed it’s behind the pack. To be fair, the spec only goes as far as 9.5ppm monochrome and 9ppm colour, and we saw speeds of 11ppm monochrome and 5.9ppm colour, with the mono speeds increasing to 17ppm with the printer set to draft mode. We wouldn’t recommend using that too often, though, as the print goes noticeably grey with fuzzy edges. It’s a shame that the continuous print speed is so average, as its time to first page, usually at 12 to 18 seconds, is pretty good. 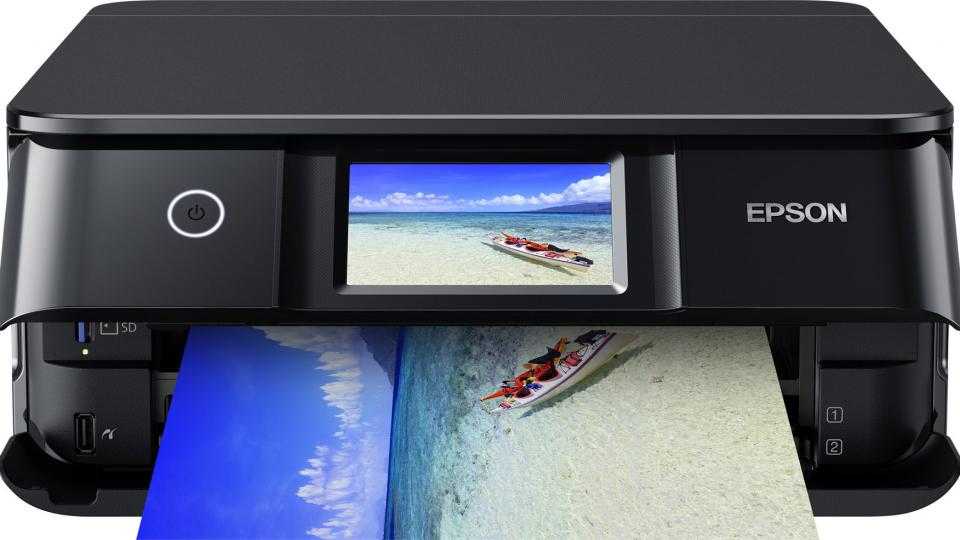 It’s also not that fast a photo printer. A 10x8in photo took 1 minute and 48 seconds to make it out to the paper tray and even a 6x4in print took 32 seconds. An A4 colour test page with multiple images and colour graduation tests took over two and a half minutes to arrive. That’s a lot slower than the Canon Pixma TS-8350 and even the aging HP Envy Photo 7830.

The results are worth the wait, however. Bar some very odd glitches where we had a single white line across the print, photos from the XP-8600 are nothing short of excellent. At times it struggles to resolve really dark tones in the shadows, but colours are vivid without looking over-egged, the level of detail is impressive and graduations of hue and tone are beautifully smooth. These are photos you’d be happy to hang on the wall or shove into a photo frame, and colour graphics and illustrations look almost as good, with the XP-8600 excelling on linework and accurate colours.

If there’s a weakness, it’s that black text doesn’t look quite as black or as sharp as it could be. We wouldn’t have any problems using the XP-8600 for professional documents, but it’s not as strong here as the best office printers.

As for versatility, the XP-8600 delivers great-looking black and white and colour copies, in under 17 seconds and 18 seconds respectively. And once you’ve got through the peculiarities of Epson’s SmartScan scanning app, it produces excellent, detailed and colour-accurate scans. The issue is that it wants to do everything automatically, scanning documents at just 200dpi and only stretched to 300dpi on our test photo. This means you really need to explore the settings menu if you want to get the best from the scanner.

At this point, we’re rooting for the XP-8600. It’s not as good an all-rounder as the Canon Pixma TS-8350, but it makes sense as a high-class photo printer that can also handle other jobs. The problem is that its ink costs aren’t cheap. A set of six inks in the higher capacity XL cartridges will set you back well north of £100, whether or not you buy direct from Epson. Even the black ink on its own will cost you £20. Now, one XL pack will print out roughly 830 photos, but that still puts cost per colour page at 13.6p, with black pages coming in at 3.6p per page. That’s nowhere near as astronomical as the running costs of Epson’s budget Expression Home XP-4100, but prepare for the hit when your inks run dry.

The Expression Photo XP-8600 isn’t the best premium home all-in-one out there; the Pixma TS-8350 and HP Envy Photo 7830 are both faster, and the former produces crisper black text and colour documents. Both of these rivals beat the XP-8600 when it comes to running costs, too, as will hordes of other home and office inkjets. The XP-8600’s strength, however, is that it produces some of the best A4 photos you’ll get without spending hundreds of pounds on a high-end photo printer. Those photos won’t come cheap, of course, but if you want quality, you’ll have to pay the extra. 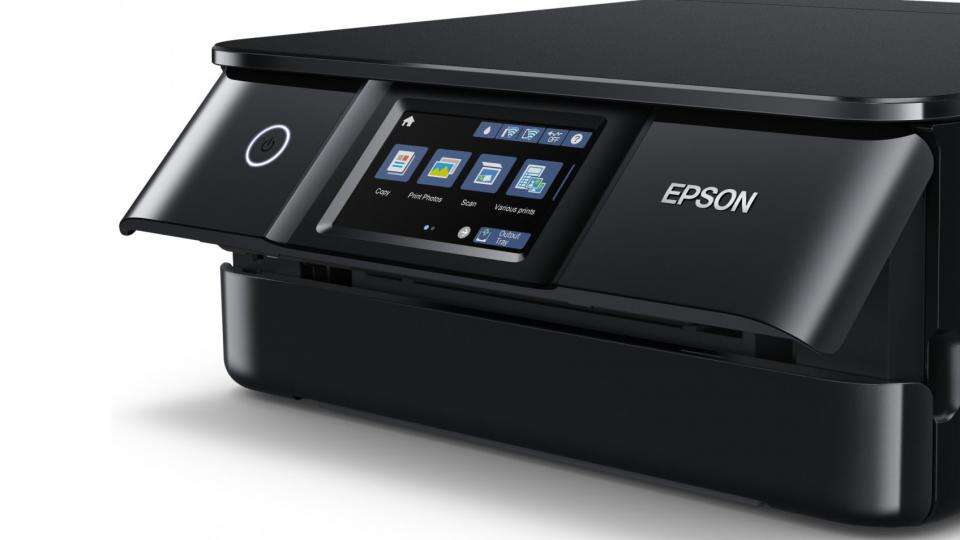