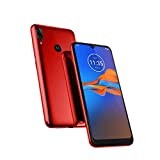 Moto E6 Play review: A disappointment, even at £90

Last year, Motorola released the Moto E6 Plus , which is a pretty weird name for a phone if you’re not planning on releasing any other versions. So, sure enough, we finally have a stablemate: the E6 Play.

Name aside, however, there’s not actually too much the two have in common. Suffice it to say, the E6 Plus is 10% more expensive for a reason, and it’s definitely worth scraping together the extra tenner if you possibly can.

Moto E6 Play review: What you need to know

For the majority of the last decade, Motorola’s Moto G series has been the last word in budget phones. Although, if they still look a touch too pricey for you to justify, then the company actually has a tier below this: the cheapest range is the Moto E family. These are as basic as the come, but typically hover around the £100 mark, thus offering a welcome reprieve as flagships begin to break four figures. 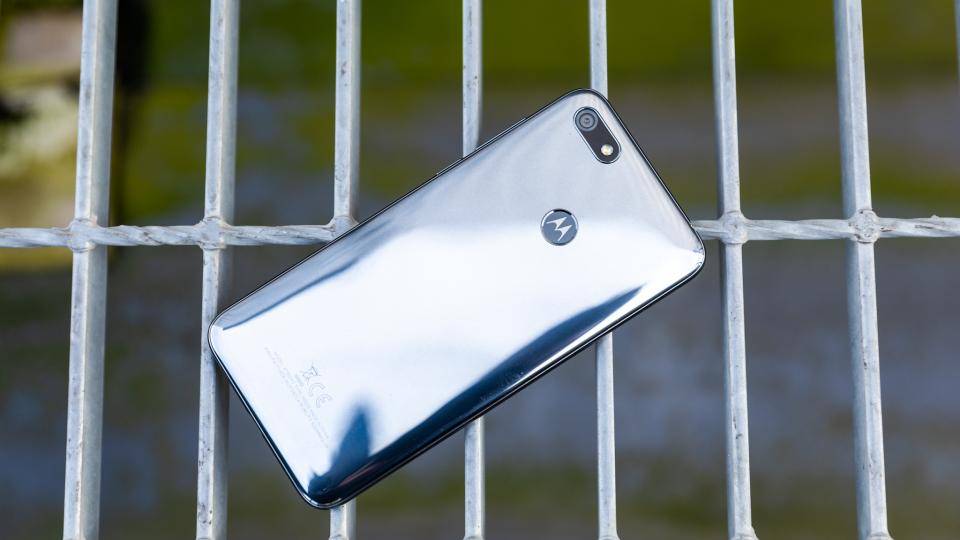 As I mentioned earlier, the Moto E6 Plus launched late last year, and it was hard to find any fault for how little Motorola was charging for one. Typically, Motorola’s Play brand refers to phones which go easier on the specs for a lower price, and that’s very much the case here. The screen is not only 0.6in smaller – measuring 5.5in – but it also includes the MediaTek MT6739 processor, which is quite a downgrade from the Helio P22 that powers the E6 Plus.

These cutbacks result in a 10% price drop, with the E6 Play costing £89 to the E6 Plus’ £99 . Phones at this price are few and far between, and ones that are actually worth your cash are even rarer. Other than the excellent E6 Plus, we’d also recommend looking at the Xiaomi Redmi 7A, which also costs £99 .

Finally, if your budget stretches, then the Moto G7 Power is well worth a look. It’s one of our budget favourites, and while it retails for £180, it can easily be found for £130 or lower if you shop around . It is markedly better than all the phones listed above.

Design-wise, the Moto E6 Play looks very similar to the rest of the cheapo Moto family. Which is fine in my book: it doesn’t look like a budget phone, as such, though those that know what to look for will spot the thicker bezels as a marker that you’re not rocking the latest flagship.

However, Motorola does do a good job at minimalist design, and that’s pretty apparent when you flip it over. A discrete single camera and flash sits in the top left, while a circular fingerprint reader with Motorola’s ‘M’ logo sits slightly indented near the top. 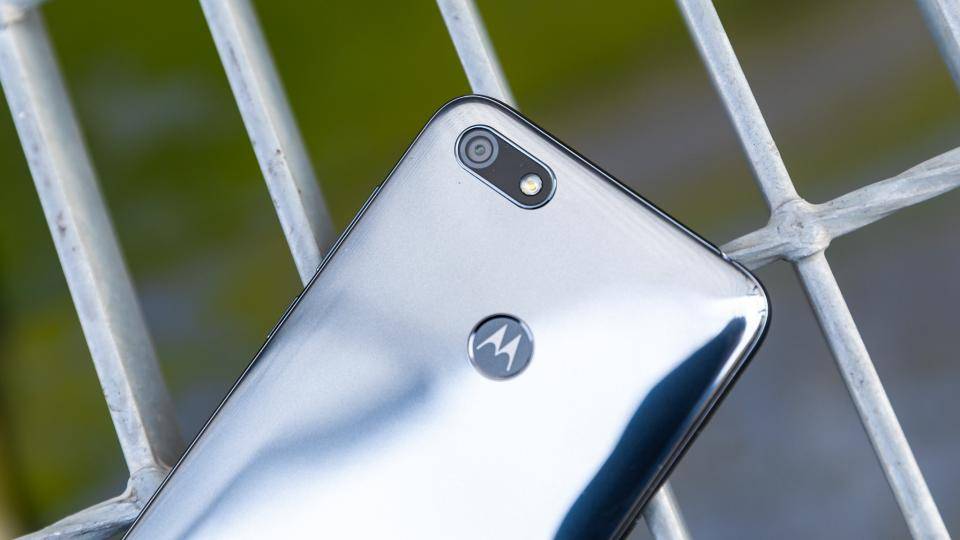 The back cover is a shiny black plastic, though curiously it can’t be removed like the one on the Moto E6 Plus. That’s a pity – while most phones don’t have it, it was a definite advantage of the E6 Plus, being able to change out the battery at will without getting professionals involved.

Otherwise, Motorola is pretty good at consumer-positive design, and the E6 Play is no exception. There’s a 3.5mm headphone jack, it supports microSD cards of up to 256GB in capacity, and it’s dual-SIM to boot.

As screens go, it’s nothing to write home about – presupposing that you’re the kind of person to write letters about display technology. While the contrast is very good at 1,444:1, an sRGB gamut coverage of 82% points to a display with very poor colour reproduction.

Viewing angles are actually pretty good, mind, and you can’t expect the world from a sub-£100 phone. But the real deal breaker is maximum brightness which only reached 359cd/m2 in our tests. Not only is that pretty dark on its own terms, it’s also well behind the Moto E6 Plus, which managed 512cd/m2 in the same test.

In short, it’s an adequate screen for the price – I’ve seen much worse from more expensive rivals – but you can do a lot better for just a little more money.

Performance is where things begin to fall apart for the Moto E6 Play. It’s just not pleasant to use, and the culprit is obvious from the get-go – all fingers point at the weak MediaTek MT6739 processor.

We’re yet to find a phone powered by this chip that hasn’t been frustrating to use. The Alcatel 1X , Doogee S40 , Honor 7S and Vodafone Smart N9 all struggled in our benchmarks, and weren’t fun to use on a daily basis at all. Click each one of those reviews and you’ll see similar complaints to what you’re about to read.

The Moto E6 Plus is slow and laggy out of the box, which is never a good sign for phones which inevitably slow down over time. The keyboard takes a second to pop up, and letters trail on the screen at a clear lag after you tap them.

This experience is backed up by the Geekbench 4 benchmarks:

As you can plainly see, the Moto E6 Play is a regular slowpoke, right down there with the dreadful Alcatel 1x. And while you’d expect to see the G7 Power storming ahead (it was, afterall, £179 at launch), it’s astonishing to see both the Moto E6 Plus and Xiaomi Redmi 7A roughly doubling multi-core performance. Essentially you’re looking at 50% more grunt for 10% more cash.

Graphical performance is even worse, as the graph above shows. This table is a little confusing, but the bars you care about are the yellowish ones – onscreen fps is clouded by the fact that each of these handsets have different screen resolutions. Offscreen levels that playing field, and shows you what we already knew: the E6 Plus and Redmi 7A do a much better job, for only £10 extra.

To complete the hat trick of benchmark disappointments, the E6 Play’s battery life is really poor, too. Despite having the same 3,000mAh battery as the E6 Plus, the E6 Play lasted five hours less in our benchmark with a total of 10hrs 9mins. That’s absolutely dire and given the Alcatel is similarly poor, we can only assume that the MediaTek MT6739 gobbles electricity despite being a disappointing performer.

To end with a slight positive, the Moto E6 Play does at least stick with Motorola’s tradition of keeping Android as clean as possible. This is basically a clean install of Android 9 Pie, and it’s all the better for it. Though given how slow it is with this, we can only shudder at the thought of it weighed down with bloatware and an intensive Android overlay.

But back to the E6 Play: how does it compare in our camera tests? Well, adequate just about covers it. In well-lit outdoor conditions, pictures are fine, with a decent amount of detail even on an overcast day in London.

Zoom in, however, and it’s apparent just how soft things get. Look at the red brickwork on the wall here – it just turns into a smooth mess, even compared to the Alcatel 1X’s poor camera.

As with all phones, the real challenge is low-light photography and here the Moto E6 Play struggles to mitigate blurry smoothness. I took several photos to try and correct this, and every time the results weren’t great. It narrowly beats the Alcatel 1X, but again that’s hardly an endorsement.

The front-facing selfie camera is also pretty poor. If there’s any kind of light source behind you, things just wash out to a point of unusability. Even without, things are both blurry and lacking in detail. The beauty slider turned all the way up to max (right) makes you look distinctly alien:

The Moto E6 Play is a misfire from Motorola. Pay 10% more for the Moto E6 Plus or Xiaomi Redmi 7A and you get a phone that’s twice as good in many respects. Both make compromises when compared to pricier phones, but they’re pleasant to use and do a good job of papering over the cracks.

The Moto E6 Play, on the other hand, fails across the board. It’s painfully slow, has a weak camera and loses five hours of battery life on its slightly more expensive sibling. If it cost £70 we could forgive all this, but for £90 we’ve come to expect a lot more from Motorola.

While we appreciate an additional £10 is a big ask if you’re already struggling to set aside £90, it’s well worth finding the extra if you can. The difference is night and day.