The Surface is a product that sees gentle revolution rather than drastic redesigns, but speculation will start to ramp up in the coming months over what Microsoft has planned for its next generation of laptops and tablets, including the Microsoft Surface Pro 8.

Read on to see everything we know about the Microsoft Surface Pro 8 and our wish list of updates we’d like to see added.

Surface Pro 8 release date: When will it launch?

There’s no word yet from Microsoft in terms of a defined release date for the Surface Pro 8. After all, they only just launched the Surface Pro 7 and Pro X in October 2019.

The Surface Pro used to follow a bi-annual release schedule, but that all changed with the latest models. Assuming that Microsoft chooses to follow that pattern again, the next Surface devices should be expected around October 2020.

Surface Pro 8 price: How much will it cost?

The Surface Pro has fluctuated over the years when it comes to price. The Pro 7 - with Intel Core i3 and 4GB of RAM - will set you back £799, whilst the Pro X - which comes with 8GB of RAM as standard - costs £999. It’s fair to estimate that should Microsoft bring out just the one Surface Pro 8 product next year, the price will fall somewhere between these two. Ultimately, it all depends on the chip, RAM and storage.

Microsoft doesn’t exactly reinvent the wheel with each new Surface Pro release. Every new update is a subtle improvement to the previous model, with the design remaining consistent from one Surface to the next. Nevertheless, the evolution of the Surface Pro brings with it intriguing questions about what’s coming next: here are some of the things we’d like to see included.

if a patent filed by Microsoft in 2018 is anything to go by - which it usually isn't - the Surface Pro 8 could have a Type Cover with built-in solar panels. The image below was originally found by Windows Latest and depicts a Surface hybrid resting on a hinged cover that has four solar panels built into the outwards-facing side of the stand:

The patent explains that the panels can be used to charge the Surface device when placed near to any light source (artificial or natural). Many people have already pointed out the fact that this setup allows the user to use the 2-in-1 as it charges, and that the panels can be angled to catch as much light as possible.

Obviously, there's no guarantee that this technology will even make it beyond the patenting stage, let alone make it onto the spec sheet for the Surface Pro 8. Still, it's fun to dream.

The Surface Pro is a great laptop for gaming and watching movies on. The speakers on the device are a little small though; there are rumours that Microsoft has filed a patent for an external speaker for the Pro 8 that doesn’t compromise the weight of the product too heavily. It would be a welcome addition and one that improves the viewing experience.

Clocking in at around 13 hours, the Surface Pro X is modest in its battery life. It features a bespoke ARM-based CPU called the Microsoft SQ1, of which not much is known, except that it has Qualcomm Snapdragon processing. Considering however that some Snapdragon chips boast over 20 hours of juice, it’s likely that Qualcomm and Microsoft will redevelop their tailored chip over the next year, potentially improving the charge on the Surface Pro 8. 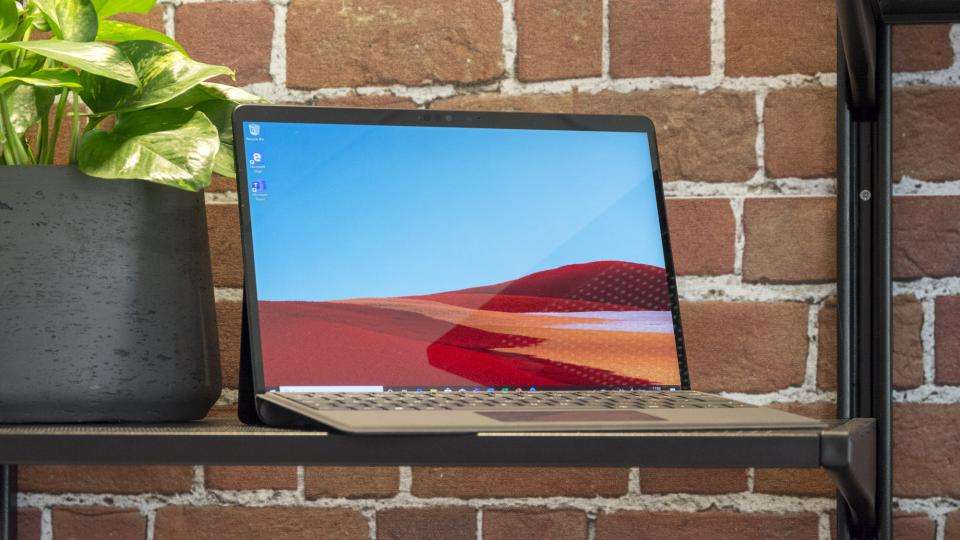 With the Surface Pro 7 and Surface Pro X coming out side-by-side, the comparisons are clear to see. The Pro X is thinner and a little wider, making the Pro 7 - which hasn’t changed that much from the Pro 6 - look like yesterday’s news. It’s likely that we’ll see the Pro 8 pick up the baton from the Pro X, design-wise, leading with a sleeker look than the Pro 7.

The Pro X offers 128GB, 256GB or 512GB removable SSD storage; the Pro 7 isn’t quite so flexible and doesn’t offer a removable SSD. The Pro 8 is likely to build upon the best things about the two models, so offering removable SSDs would be great for users who wish to upgrade memory.

In the past, Windows has categorically denied the potential release of Windows 11. Unlike Apple, each new operating system signals a company-wide rebrand; so despite the redesign of a number of apps from Microsoft, Windows 10 is likely to develop further in the next year. Whilst there are subtle tweaks to Calendar and File Explorer in this month’s Windows 10 update, it’s not a big update to the system. Expect bigger changes over the next twelve months: the Surface Pro 8 will likely be one of the first Microsoft devices to take advantage of them, too.