After entering my credit card info, I opened up my loot box in hopes of getting a cool, new skin for my character. After the shimmering box finally opens, a bunch of junk falls out. I then repeat the process 10 more times as my checking account dwindles and dwindles.

If this sounds familiar, you’re probably not a fan of loot boxes either.

Luckily, it seems like Nintendo, Microsoft, and Sony have gotten that memo. Starting in 2020, every game published on a Nintendo, Microsoft, or Sony console has to disclose its loot box drop rates. Now, players can at least see their actual chances of scoring decent loot before entering their credit card information.

Also, several video game publishers have agreed to disclose their loot box drop rates in all of their games regardless of the publisher. These include:

This has all been a part of a new initiative from the Entertainment Software Association and the Federal Trade Commission. 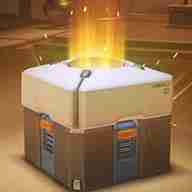 What is the issue with loot boxes?

Back in the day, unlockables were obtained by, well, unlocking them through in-game challenges.  Also, if they came out after the game’s release, you would just purchase them as DLC without having to jump through any hoops. However, it seems that nowadays,Sur the name of the game is loot boxes. Game developers have realized that instead of doing the extra work of making in-game challenges, they could make more money by making players purchase loot box after loot box.

A loot box is a relatively new mechanic in games where players spend real-world money on boxes that have the potential to give them rare items. Although there were loot-box-like features in games in the mid-2000s, the loot boxes we know today have mainly been inspired by Overwatch.

Loot boxes always drop some loot, but most of what you’ll get is junk. It’s a lot like if buying a pack of trading cards.

What are the real dangers?

Since we first saw them enter the world of gaming, loot boxes have left a bit of a sour taste in our mouth. The potential to get cool gear in our favorite games is great, but dishing out real-world money for a chance to get the better loot came has come off as gambling.

A recent article from The Verge dove into the harsh realities of loot boxes. In the article, one gamer said that their loot box gambling addiction lead to about $10,000 in spending.

The Game Theorists also created a video discussing the science behind why buying loot boxes is so addictive. Basically, every time we invest more time and money into buying loot boxes, our brains are telling us that it would be a bigger loss to stop buying them rather than keep going. This is quite similar to what most gambling addicts suffer through.

Regardless of whether you think loot boxes are good or bad for the gaming industry, the fact remains that knowing the rates of which rare items are dropped will be nice. If we see that we have a 1 in 10,000 chance to get a new skin in a $3 loot box, it’s going to be a pretty easy decision to give it a pass.

What are the best selling video games of all time? ►