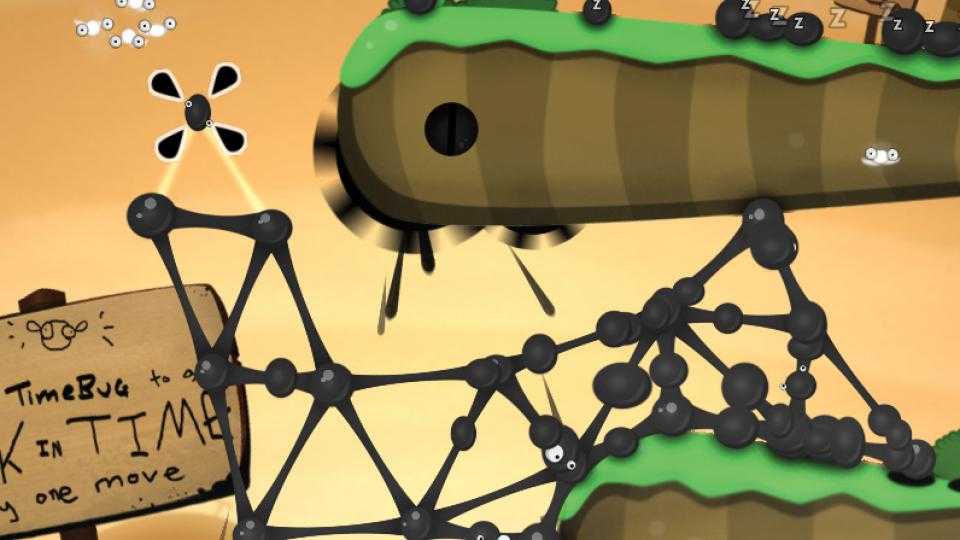 World of Goo is a brilliantly innovative puzzle game, created by independent developer 2D Boy. Using some excellent physics and with high production values, the company has certainly pulled out all the stops.

The surreal two-dimensional World of Goo is filled with balls of goo. These aimless little creatures usually just wander to and fro. Pick them up with your cursor though, and they can be used to construct any structure you can imagine. Each ball forms a number of new struts based on its positioning. Once in place they are surprisingly rigid, at least for goo. However, enough flexibility remains to require careful bracing and support of bigger structures.

The purpose of your construction is to reach each level's exit pipe, which is positioned high out of the way or surrounded by vicious goo-popping hazards. Goo balls that haven't been placed wander about on the beams and struts of your creations. Link your tower, or bridge, to the pipe and any remaining goo balls are sucked up into it. You must save a minimum number of balls before you can proceed to the next level.

The basic goo balls have no special properties and can't be moved once positioned, but as you progress through the game new types of goo are discovered. Green goo, for example, can be removed from a structure and placed elsewhere, allowing you to move a clump of green goo up a shaft, or across a series of gaps. Red goo is flammable, and you can use fire to set off explosives in some levels, while sticky goo lets you attach your constructs to moving elements in the environment.

Beyond the many types of goo, there's also amazing variety and ingenuity on show across the 50-odd levels. There are five different worlds, each with themed puzzles. One level finds you using balloons to suspend your goo tower up and over a deadly windmill, while another finds you easing a giant female goo ball out of a monster's mouth.

The graphics may be simple, but the art is both imaginative and captivating. The game has an off-beat surreal tone. Levels are littered with signs, which mix helpful hints with self-referential humour and even social commentary. The audio is better still, with a haunting soundtrack and some great effects.

The earlier levels are fairly simple, and if you're stumped then a little trial and error usually does the trick. Once you've mastered the game, you can try the OCD challenges, which have a mix of time limits and maximum number of moves and balls to save. It's an amazing game whatever your skill level, and it's one we think no-one should miss out on.